Daniel Castro, aka "Atrox" has a background in teaching and engineering and works as a freelance translator/localizator. On the other hand, he considers himself a "videogame connoisseur" and he enjoys to talk and write about videogames as much as he enjoys actually playing them.

He has written on sites like CultureMass.com, and VentureBeat.com (formerly Bitmob), he has done a few more guest stuff for other sites, and he's still a staff writer for GameCola.net.

In this blog you'll get a glimpse of the things he does over the 'net.

River City Pixels is a webcomic about the anecdotes of Dan (the author himself), which mostly revolves around videogames, his friends and every little thing happening to him in real life.

Speaking of which, the characters in River City Pixels do homage to the characters behind the Downtown Nekketsu Monogatari videogame series, better known in the west for their appearance in games such as River City Ransom, Nintendo World Cup, and Crash 'n the Boys Street Challenge. 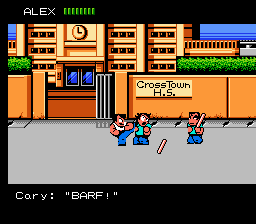