Don't be that Guy

Now that this blog is officially moving again, I’d like to talk about the things that you’ll frequently find in here, and the first thing I need to tackle is the Column that gave such much joy, and the beginning of my writing career: Don’t be that Guy.

It started as a funny flowchart I did for Bitmob.com (now called GamesBeat) back in 2011, when I was really into Online Gaming; that article would end up being edited, posted on the main page, and read by tens of thousand viewers; one of them: a curious fellow called Paul Franzen.

Paul Franzen former Editor-in-Chief of GameCola (a website dedicated to videogame humor) liked what I did in that article and invited me to collaborate in his website. I won’t say I immediately agreed, but becoming part of GameCola’s staff was one of the single best decisions I could have ever taken.

While talking about what kind of articles I could write for the website, Paul told me he enjoyed the way I lampooned the annoying online gamers on Bitmob, so after a few e-mails, I agreed on doing this column called Don’t be that Guy, where I would tackle some of the worst behaviors displayed over online gaming.

I had a good run with the column (11 monthly articles), being into online gaming gave me a lot of material to work with. Some of my favorite articles were This Banning Season, Noob vs Pro, and Those Darn campers!, but the best part of writing these is counting with Paul Franzen to give some input about how my articles where doing.

I learnt a lot about writing and editing thanks to Paul’s suggestions; every article I wrote for the column was—in some way or another—influenced by his comments. I can’t really thank him and the rest of the GameCola staff enough for having me on the team.

That didn’t upset me though… I don’t consider myself a “one trick pony”, and after a talk with Paul Franzen, I let him know that I was interested in writing a different set of articles for GameCola, and actually… I started feeling tired about online gaming (for reasons I’ve written before), so the site’s new focus settled right for me…

So, on August 31st the last Don’t be that Guy column was published: How to play your Generic First-Person Shooter, which ended as it started… as a flowchart. I loved what I did there, and it still amazes me to see my article coming first page if you google “generic first person shooter” (a term currenly being used over 400,000 webpages). 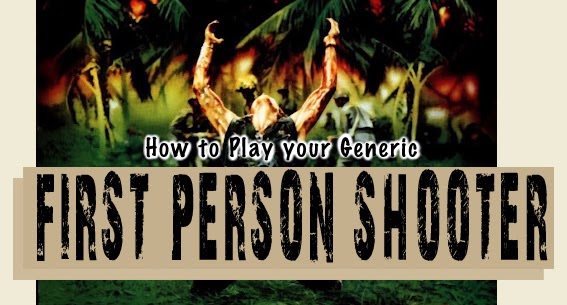 I’m still thinking about writing a little more about this column, but as I mentioned before, I stopped caring about online gaming some time ago… and it will take some time before I feel like talking about that topic.

Talking about that, World of Tanks left such a good impression on me last night… so, maybe… just maybe.
Publicado por Atrox en 3:00 PM